United scored twice in the last ten minutes to save a point after a sub par performance against the capital side. United’s New Year hangover seemed to continue as Hibs capitalised on a bizarre piece of play by Cierzniak and his back line from a goal kick as Liam Craig nicked in to grab his first goal of the afternoon.

United suffered a further setback a few minutes later as Nadir Ciftci was forced off with what looked like a thigh strain to be replaced by target man Brian Graham.

After the break, it was end to end stuff. But mid way through the second half, a lapse in concentration by young John Souttar forced him to push Collins to the ground and the referee immediately pointed to the spot. Craig stepped up to bang home his 2nd of the afternoon to leave the large travelling support going wild.

United needed a response in order to stave off a 4th successive defeat. Goodwillie was thrown on to replace young Ryan Gauld, who seems to have suffered from a loss of form after a quiet afternoon. Goody wanted to leave the Tangerine faithful with something to remember him by and quickly created a buzz around Tannadice as United roared into life.

Seven minutes from time and Goodwillie gave United some hope when he latched onto Graham’s cross before turning and firing past Williams from close range. As the game drew to its conclusion, up popped Brian Graham whose reflexes turned in a Goodwillie shot.

A point gained rather than 2 points dropped. Here’s hoping United can push on from here. 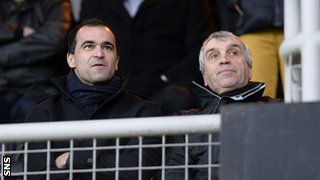 Roberto Martinez was spotted with chief scout Kevin Reeves – who do you think he was watching?

A Stevie May hat trick sunk a lackluster United “B” team in the final match of 2013.

McNamara made 8 changes to the side that fell to St Mirren on Boxing Day. A strong away support were left baffled by the decision to see Rankin, Armstrong, GMS, Souttar and Ciftci all dropped to the bench in favour of fringe men Erskine, Dow, Gomis, Butcher and Goodwillie. A quiet first 20 minutes soon exploded as Butcher seemed to pull down May, who made the most of it and the referee without hesitation gave Butcher his marching orders before May slotted away the penalty.

United seemed to come out rejuvenated after half time but this was short lived as May cut in from the left and from the tightest of angles managed to find the far corner to score his 2nd and put the game beyond United. As the fans headed for the exit, May completed his hat trick to seal a 3-0 win for the Saints to send them sixth and United falling to fifth.

Stephen Finnie, the referee, had could what only be described as a shocker with some truly outrageous decisions including booking United’s Paul Paton as he tried to take a free kick which was blocked by a St Johnstone player. A performance matching that of the United team. With Aberdeen coming to Tannadice on New Years day, United will have to up their game in order to get back to winning ways.

Although, the scoreline was a poor reflection of the effort put in as United were arguably the better side up until Keith Watson’s straight red card.

The Buddies were first to strike through ex-United player Steven Thompson before John McGinn put St Mirren into a suprising 2-0 lead. But Nadir Ciftci hit straight back to signal that United were not dead and buried yet. That was as good as it got for United as young Jason Naismith tucked away a 3rd from the freekick follwing Watson’s dismissal. St Mirren added a 4th through Thompson to cap a fine performance from the Paisley outfit, ending a 4 match game winless run.

A great attendance of 1252 travelling Arabs made the trek home disappointed. United will hope to bounce back in the Tayside derby on Sunday against St Johnstone.

United leaped into second place in the Premiership with a hard fought win over relegation candidates Ross County. A solitary strike from in form winger GMS propelled United to their 7th straight win in all competition.

The scoreline of 1-0 didn’t tell the full story as United controlled the match from start to finish, with County providing a few scares but rarely threatened.

Although Jackie can take great heart from this performance. It showed United not at their best, but still pulling through to win their 6th Premiership match in succession.

Speaking to the BBC, Jackie said

“The most important thing is the three points”

“I thought we kept plugging away at them, we were very patient, but we got our just rewards in the game.”

When questioned about Mackay-Steven’s crucial strike

“It was a fantastic finish and a great pass from Stuart,” said McNamara.

“I’m delighted for him and the lads, because they put so much effort into it.

“I emphasised it before the game, to be patient, that they would get their rewards – and they got it.

“I thought they tried to take the sting out of the game, time-wasting at times. But we kept going, especially in the second half and I thought we got what we deserved.”

County keeper Fraser tried to slow the game down at times with some laughable time wasting, ignored by referee Brines, but it only set to make United more determined to get the three points.

“We could have had a few more goals, but the good thing is we’re creating chances, and from me as an ex-defender, it’s good to get a clean sheet.

“It’s important – there’s a busy period coming up with the games we’ve got, so we need everybody in the squad and when they came on it put Ross county on the back foot.

“Given the start we had at the start of the season, the first few games there was a few question marks over the squad, but I’m delighted for the lads and the effort they’ve put in, their desire to keep going in games – they get the rewards for it.”